I’m somewhat relieved that I made it through the Spanish mountains and especially through the headwind. Approximately 113 kilometers I had to skip because of the headwind. Nevertheless, I rode 2033 kilometers from Tübingen about Pfäffingen (small Village near Tübingen), Strasbourg, Switzerland, Montpellier and Barcelona until Santander That’s okay for now.
Hence it will be more chilling. In England I will make only two short stages and then is following the north of France, Belgium, Netherlands and finally Berlin. But first I am going by ferry tomorrow from Santander to Portsmouth.
Actually, I was hoping that it is getting better again for Europe after my trip. So far that has not worked out. Terror in Nice and then Turkey. In both cases, however, I do not want to judge it the same way like the official media do. There are too many stereotypes in these cases. At the fall in Nice we could also discuss mental illness and limitations in the weapons law. And the putsch trial in Turkey could have been carried out by democratic forces. Example: In the 40s, the NSDAP would have won the elections in Germany. Nevertheless potential Hitler assassins are today glorified, their were also out of the military. A putsch could have its moral justification. About Turkey I know too little to evaluate this case. However, I just do not like the simple evaluations from the media.
Again to Spain: I think it’s scenically much more impressive than I would have expected that. The regional diversity and the conflicts in that were not so clear to me. On the last stage I was particularly impressed of the Portillo de Lunada. The climb of 600 meters altitude difference was very hard for me and the downhill beautiful but dangerous. There were poor fixtures and many curves. Cantabria is very hilly. Finally, the last 50 kilometers, it was all downhill. There were some Spanish racing cyclist who cheered to me. Here are probably less travelling cyclists and a wonderful cyclist-unity. Spain – a real cyclist country! 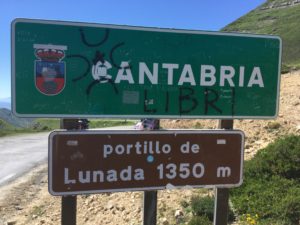 News about bikes and democracy