My real name is Mark E. Vogt and musically and politically, I am known as “Häns Dämpf”. I started 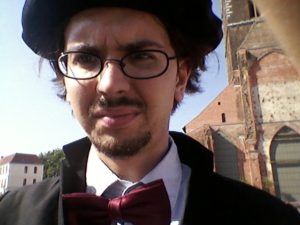 my alter ego Häns Dämpf with 21 years as a musician, after my grunge alternative band had dissolved. Meanwhile, this name has also evolved. As an “Die PARTEI“-candidate (this is a satirical party from germany which I am member of) I took part with this name even on official mayor elections. So the name is flexible. Probably also for cycling. I’ll test it in June, July and August in 2016.
My hometown is Tübingen and I have studied at the university philosophy , political science and sociology. That’s what I love to do. I am working now ,something with Internet’ to earn my living. Above, sine 2014 I ‘m sitting for the above-mentioned party “The PARTY ” and the Stammtisch ” Our chicken ” in the city council in Tübingen .
Musically, I ‘m still very active with song Slams in Stuttgart and Tübingen (Song Slams are something resembling poetry slams just with songs and music). In addition, I publish from time to time Dada songs like this one:

Politically, I am a member to the satire Party “Die PARTEI” which is normally seen in the extreme center, but may need to be considered as a left party. Yet it has also some liberal positions, especially when it comes to beer: Anyone may destroy his life as he wants.
The political system in Germany is unfortunately kind of sleeping at the moment; therefore it must just be “Die PARTEI”. Moreover, German politicians are lacking in the power and the passion to really change something in Europe. By this I mean in particular the economical policy that is more applied to savings and regulatory compliance rather than to strong investing both in the social as well as in the digital. We burn too much in our own juice. I am very annoyed and am afraid that we will be a right-wing populist republic in which the pensioner increasingly call the shots and block the future of the younger technology affine with social finesse.
I support DIEM 25 of Yanis Varoufakis. I hope that the movement is not limited to his character (medially viewed). It may need to be more aggressive and entertaining. But it exists only just a few months. Opposite to the right-wing populism living in the illusion that you could solve the problem of large corporations and big business within the individual (mostly small) nations, it needs a powerful third force in Europe. At the moment it feels like there are only large coalitions and on the other side the rights which are keen on conspiracy theories. With my bike ride, I just want to put up a small, even optimistic sign.

News about bikes and democracy